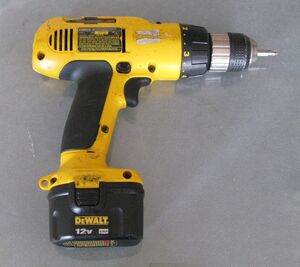 A cordless drill is a cordless (battery-operated) electric drill. Most are equipped with keyless chucks, though the first models featured keyed chucks, as the keyless chuck had not yet caught on in consumer tools.

Modern cordless drills are available in multiple voltages, starting at 7.2 volts and increasing in 1.2-volt-steps to 24 volts or more. Larger models may feature a hammer drill function, in addition to the standard variable-speed forward and reverse, and all but the lowest quality drills feature a variable setting clutch for use when driving screws.

The clutch is intended for use when driving screws. It serves to limit the maximum torque applied to the screw bit, allowing the drill to stop turning when too much resistance is encountered. This prevents stripping the screw head, screw bit, and the threads can  screw any hole.

Retrieved from "https://toolpedia.fandom.com/wiki/Cordless_drill?oldid=4256"
Community content is available under CC-BY-SA unless otherwise noted.